I first learned of writing marathons when Amy Lannin, Campus Writing Program Director, hosted one during our MU National Day on Writing activities. She took students all around campus and asked them to walk about the various landmarks, stop, observe, listen, and write. This activity intrigued Dr. Tim Safranski, who was then a member of the Campus Writing Board. He came to Amy and me and asked if we’d be willing to help facilitate one with his students at the MU swine farm. 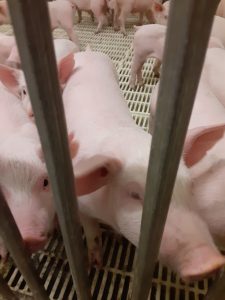 After we put on our muck boots, we jumped right in! It went so well that I also incorporated this idea with my community college students who also visit the swine farm. My students were unsure at first about the concept of a writing marathon, but once it was explained and they had experienced it, they saw the value in the activity.

What is a writing marathon?

The idea of a “writing marathon” comes from Natalie Goldberg’s Writing Down the Bones.  In a marathon, a small group travels to a few locations to observe and soak in the surroundings and then write nonstop for a set amount of time.  After writing, the group members share.  This is repeated as often as possible.

Here’s what Goldberg says:  “Everyone in the group agrees to commit himself or herself for the full time.  For the first session we all write for [five] minutes and then go around the room and read what we’ve written with no comments by anyone…A pause naturally happens after each reader, but we do not say ‘That was great’ or even ‘I know what you mean.’ There is no good or bad, no praise or criticism.  We read what we have written and go on to the next person.  People are allowed to pass and not read [once] during the marathon.  Naturally there should be some flexibility.  What usually happens is you stop thinking: you write, you become less and less self-conscious.  Everyone is in the same boat, and because no comments are made, you feel freer and freer to write anything you want” (p. 150).

What was the goal of our marathon?

Dr. Safranski and I both teach animal science courses to different levels of students. I currently teach introductory students at the community college who are just exploring animal science. Dr. Safranski first approached the CWP about adding a marathon toward the end of the semester of his senior level Swine Production course. He was worried that even though the students were often out at the swine farm, they weren’t taking good notice of their surroundings. No matter the level, part of a being an excellent animal scientist involves animal husbandry skills which includes the ability to observe the animals and their surroundings to notice any illnesses, odd behaviors, and dangerous conditions. Thus the overall goal of the marathon was to make students take the time to observe their surroundings and the animals more carefully. Dr. Safranski puts it well when he says,

“For my audience the goal was to help them see what is similar/different within different phases of pork production. To force them to look, listen, smell and think about what is inside a pig barn, and perhaps wonder why.”

Why the swine farm is an excellent site for a marathon?

The swine farm serves as an ideal location for an activity like this with lots to see, smell and experience. As a teaching farm, the MU Swine farm contains four different rooms, each representing a different phase of swine production. One room represents breeding, another for farrowing (or birthing), a nursery for young piglets, and a growing room for older hogs. This allowed students to visit 4 different locations for observation. Similar activities could be done on other farms/locations which have different areas for different ages of animals.

How we facilitated the marathon?

For the writing marathon, students were asked to bring a notebook or clipboard for writing their notes and then met in the main classroom area. Before starting, the TA explained to students what to expect and what the goals were for the marathon. The students were given a handout (download handout here) with directions, writing prompts and space to write. 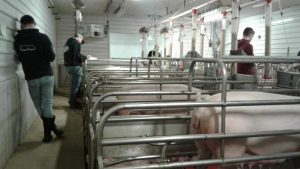 A TA accompanied each of the groups with a timer. Upon entering the room, the students were encouraged to stand quietly in the room observing for 3-5 minutes. After that time, the TA announced it was time to write for 5 minutes. When I facilitate these marathons, I often will call out an encouragement to keep writing with 2 minutes left on the timer and give a 30 second warning so they can wrap up their thoughts. Once the writing time is done, the students circle into groups of 5-7 students and take turns reading what they wrote. After sharing, they proceed to the next room and repeat the process 3 more times.

Afterwards, all of the students meet back in the main classroom area for a debrief. The TA/facilitator encourages them to consider what they noticed during this activity. They are also encouraged to talk about what they noticed differently after hearing what other wrote in the rooms.

How did the students react to the writing marathon activity?

Dr. Safranski captures it well when he writes, “When the exercise was introduced each year the skepticism was palpable. Then the TA completed and debriefed the activity; however, the students expressed high level of surprise and satisfaction at what they got out of the exercise.”

In the instance where I facilitated for Dr. Safranski, I found that after the group reading in the first room, students moved onto looking deeper than just describing their primary surroundings such as “they had this kinda of waterer, the pigs were making noises, and it was stinky.” It was fascinating to watch them notice the amount of cobwebs in some rooms, while others, like the nursery, were free from cobwebs. This observation alone led to a whole host of thoughtful questions in the debriefing.

Another student kicked off a cascade of observations when they wrote about their personal feelings of the room such as how cute the piglets were, the emotions expressed by the animals or of other experiences they had had in the room previously. For instance, one student had noted some stains on the wall which she guessed was evidence of the litter being born only a few days earlier.

Finally, it was interesting to note how the students viewed the animals differently. They found that the male hog, the boar, was limping and wrote about possible ways to treat or prevent this type of injury and how some of the female sows were showing behaviors of boredom, so they wrote of ways to help alleviate it.

Generally, they loved it and often referred back to this exercise and what they learned in later class assignments or writings.

How did we feel it went?

We both thought it went well, overall. Dr. Safranski plans to use the writing marathons again, ”I expect to continue using this as my first or second lab for this course.  Most of the students had been in the facility as freshmen, but now 2-3yr later they are able to see/hear/smell so much more. I think it helped them appreciate where we were going.”

My students, who were just learning the initial parts of animal science, really enjoyed a focused way to visit the farm. Typically, a farm fieldtrip would involve them walking around and hearing all about it from the owner. Instead, with the writing marathon, they were asked to dig deeper into the swine production process and analyze their experience deeper. We had just finished a unit on animal behavior, so their prompts included looking out for any of the 7 animal behaviors learned in class. It also challenged their understanding of swine based solely on their small family operations. On their lab report, students reported that this was their favorite farm trip thanks to the opportunity to just take it in and explore without being talked at the whole time. I definitely plan to use this activity again.

Tips for planning your own writing marathon:

1.     Explain to your students ahead of time why you are doing this activity.

2.     Provide guiding questions for your students who get stuck on what to write the first few times.

3.     Have a timekeeper in each room so moving is synchronized.

4.     Gather the whole class at the end of the marathon to discuss what was learned and to help drive home how students’ thinking and skills changed through the process.

Expanding on this activity for your teaching setting and learning goals:

Don’t be discouraged if farm visits are not part of your teaching plans or you just don’t like smelling like hogs, this type of activity can be adapted in many ways.

Marathons can work in any discipline because the goal is to present a place/setting/experience which asks students to pay attention and to transform their observations into written language. This is a helpful rehearsal of course vocabulary and content. Plus, it helps to build a community of writers and learners.